A Brief History of the Password Problem, Part 4: Worst Passwords of 2014 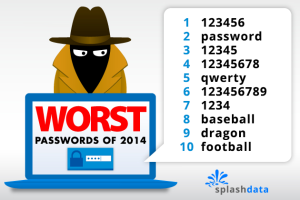 The 2014 list of worst passwords demonstrates the importance of keeping names, simple numeric patterns, sports and swear words out of your passwords.
Los Gatos, CA – January 20, 2015 – SplashData has announced its annual list of the 25 most common passwords found on the Internet – thus making them the “Worst Passwords” that will expose anybody to being hacked or having their identities stolen. In its fourth annual report, compiled from more than 3.3 million leaked passwords during the year, “123456”and “password” continue to hold the top two spots that they have held each year since the first list in 2011. Other passwords in the top 10 include “qwerty,” “dragon,” and “football.”

As in past years’ lists, simple numerical passwords remain common, with nine of the top 25 passwords on the 2014 list comprised of numbers only.

Passwords appearing for the first time on SplashData’s list include “696969” and “batman.”

While Valentine’s Day is less than a month away, “iloveyou” is one of the nine passwords from 2013 to fall off the 2014 list.

According to SplashData, the passwords evaluated for the 2014 list were mostly held by users in North America and Western Europe. In 2014, millions of passwords from Russian accounts were also leaked, but these passwords were not included in the analysis.

SplashData’s list of frequently used passwords shows that many people continue to put themselves at risk by using weak, easily guessable passwords.

“Passwords based on simple patterns on your keyboard remain popular despite how weak they are,” said Morgan Slain, CEO of SplashData. “Any password using numbers alone should be avoided, especially sequences. As more websites require stronger passwords or combinations of letters and numbers, longer keyboard patterns are becoming common passwords, and they are still not secure.”

For example, users should avoid a sequence such as “qwertyuiop,” which is the top row of letters on a standard keyboard, or “1qaz2wsx” which comprises the first two ‘columns’ of numbers and letters on a keyboard.

Other tips from a review of this year’s Worst Passwords List include:

Also in the top 100 are swear words and phrases, hobbies, famous athletes, car brands, and film names.
This is the first year that SplashData has collaborated on the list with Mark Burnett, online security expert and author of “Perfect Passwords” (http://www.xato.net).

“The bad news from my research is that this year’s most commonly used passwords are pretty consistent with prior years,” Burnett said. “The good news is that it appears that more people are moving away from using these passwords. In 2014, the top 25 passwords represented about 2.2% of passwords exposed. While still frightening, that’s the lowest percentage of people using the most common passwords I have seen in recent studies.”

SplashData, provider of the SplashID line of password management applications, releases its annual list in an effort to encourage the adoption of stronger passwords. Slain says, “As always, we hope that with more publicity about how risky it is to use weak passwords, more people will start taking simple steps to protect themselves by using stronger passwords and using different passwords for different websites.”

1. Use passwords of eight characters or more with mixed types of characters.
2. Avoid using the same username/password combination for multiple websites.
3. Use a password manager such as SplashID to organize and protect passwords, generate random passwords, and automatically log into websites.

SplashData has been a leading provider of password management applications for over 10 years. SplashID Safe (www.splashid.com) has grown to be most trusted multi-platform password solution for both the consumer and enterprise markets with over 1 million users worldwide. SplashID Safe’s popularity continues to rise as the number of user names, passwords, and account numbers most people have to remember is rapidly multiplying. At the same time, the risk of this kind of sensitive information falling into the wrong hands has never been greater. SplashID Safe helps solve this dilemma by creating an encrypted digital safe available on smartphones, computers, USB keys, or online, offering the peace of mind of being able to access critical information whenever needed while maintaining the security of 256-bit encryption. SplashData was founded in 2000 and is based in Los Gatos, CA.

The Use of AI in Enterprise Cyber Security

More than ever before, enterprise cyber security is top of mind for corporate…

45 Comments on "A Brief History of the Password Problem, Part 4: Worst Passwords of 2014"